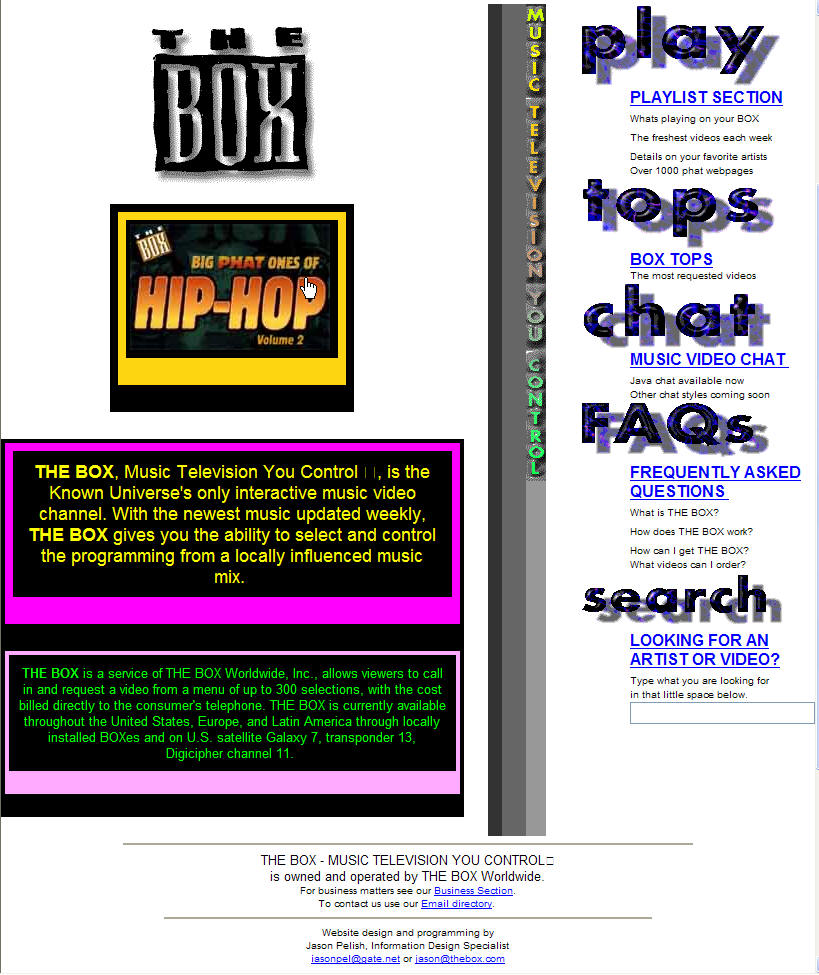 THE BOX – Music Television YOU Control was a television network that started in 1985 headquartered in South Beach, Miami, Florida, USA. Viewers had the ability to control which videos played in their city by dialing into dedicated phone lines and requesting the videos through their phones, punching in the numbers that matched the videos. Between videos the menu of available videos played like commercials while during videos the menu of video choices and numbers used to choose them scrolled on-screen while the video played. The technology to achieve this was based on the network placing hardware in every broadcast station, every cable head-end where the signals would originate as opposed to one centralized national broadcast center. Before Jason came to work for THE BOX there was no representation of videos on the website, not attempt publish the catalog of videos and their request codes. The library changed too often and the problem of different locations having different selections of videos was too challenging in 1995.

In late 1995 Jason was interviewed by VP Paul Sartain and President Alan McGlade where they walked with him to a sushi restaurant a few blocks north of the offices on Collins Blvd. Jason had shaved his head completely for the interview where he wore a burlap-like Mao-suit jacket. He was so excited at the idea of applying the highest levels of technical excellence to curating videos online that he couldn’t eat his lunch, asked for it to go, and carried it with him back to the offices.  Paul asked Jason to compile a list of all the technology he’d need to get the job done, something Jason doubted Paul was sincere about. Jason made a list from the pages of Computer Shopper, not expecting half of it to be taken seriously. Much to his surprise and delight Paul didn’t mess around: all the things soon arrived and Jason was allowed to convert their conference room into his private office, lining it with encoders and workstations intended to fill the website with the kind of content music video fans like himself wanted to see.

Together with the network’s technology team, lead by Paul Sartain, the resources of the network were adapted to keep pace with the internet and evolving digital culture. Jason used the database driven automated page creation techniques he pioneered for the analytical chemistry industry, in SPECLAB.COM, to create a massive amount of pages for the network: one for each artist and one for each music video. The problems around publishing accurate video catalogs with the timing and frequency that matched the broadcast schedules could only be addressed using automation. Code Jason created at the time was written in a language we consider archaic now: GWBasic, a programming language included in early versions of Windows. Paul’s team at the time was a “Microsoft Shop” meaning all the development tools were part of Microsoft’s business solutions using the Visual Studio IDE suite to code in Visual Basic, manage central SQL Servers and make the tools the people and distributed hardware needed to be in sync. This meant the website had to be served from Microsoft machines and use .net as opposed to PERL like the majority of web programmers were using at the time. Not only was the challenge unique, the server environment was restrictive and poorly documented. These were the early-early days of .net where most of the documentation was, for lack of a better description, absolutely wrong. This was if you managed to find any documentation at all.

Peter Cohen led the Programming Department, a group who included Jay Frank, Justin Praeger and Nelson Andrade. This wasn’t about computer programming, but rather choosing which videos made it on-air.  This group who debated each week which videos would work in various markets. These were the people who chose the content that filled the site, which artists and which videos would get national attention, and would interact directly with the artists and labels. Jason enjoyed watching their meetings and enjoyed what they selected most of the time, but ultimately Jason and his interns had to curate it all. This was the 90s, known as the last great era for music, when “gangsta rap” was immensely popular alongside experimental electronic dance music and some of history’s most cringey pop tunes.

Artist pages linked to video pages and vice versa. Each week the catalog of close to two thousand videos changed with dozens of new videos being added and removed from what’s active on-air and the website’s content matched those changes. Publishing lyrics was something everyone thought would be cool, but they were protected by copyrights and getting permission to include them on video pages was out of the question.  Screenshots and :30 second segments from the video were allowed. These assets were sampled from the videos and and uploaded to the web server and streaming server directly. These were the days pre-YouTube, when streaming was expensive. The streaming cost alone, to Akami, was around $10K a month just to serve the library of :30 second clips.

Before Jason began implementing his ideal vison for THEBOX.COM, the on-air broadcast of videos was controlled by the viewers through their telephones exclusively. Jason’s designs ultimately enabled web visitors with the ability to request videos to play on their TVs through their web browsers. Instead of just controlling the broadcast through paid phone charges, the national audience of video fans were able to use credit cards online to make the same kind of requests.

The ability to transact online with credit cards at that time, in the USA, had only recently emerged and was very limited.  This e-commerce ability seemed like a “pie in the sky fantasy” to Jason at the time because of the lack of any other examples of anyone doing anything similar – and because of the lack of technology to achieve it, but Paul Sartain pushed Jason hard towards taking the challenge seriously. In short time thereafter it was achieved and put into viewers hands, allowing them to charge credit cards instead of only being able to request videos via phone charges.

The website allowed visitors to make comments on the video pages, a feature that didn’t have much tech to support it in the years pre-WordPress, before even phpNuke experimented with web 2.0 type elements. The comments would be manually moderated, mostly pruned to limit repetition. Viewers did not have to create accounts or even identify themselves, but their comments made it on to the web pages dedicated to each video.

Some viewers adopted the unprompted expectation that the artists were paying attention to the comments and would address the artists directly in the video’s web page using a form at the bottom of each page. Sometimes comment responses that appeared to be from the artists, responding back to the viewers and fans, would appear, for example someone would reply as Usher, but it was never clear whether it was the real Usher or not, nor was it important. Maybe he remembers and can provide answers. Some video pages had hundreds of viewer comments, a true demonstration of the power of what would become web 2.0, but this was all happening early in 1996, back when everything was an experiment in uncharted waters.

This project took two years. The first six months involved creating the initial design, connecting with internal systems, and developing the process for accurately curating the active catalog of videos. During the first year an internal process of encoding, publishing and streaming :30 second clips was integrated into the pages created for new videos.  Angela Fokok and Dulce Baerga were interns recruited by Jason to help curate the videos. During the second year the system for making the videos able to be requested online was released to the public. A party in New York City celebrated the launch of this groundbreaking new media technology, a victory for the channel, where the musical group Big Bad Voodoo Daddy played live for the exclusive company-only event.

Jason was consulted, as part of his engagement with THE BOX, to tour Silicon Valley media start-ups and recommend whether emerging media tech companies should be acquired. Shortly thereafter Viacom merged THE BOX into the MTV. Angela stayed with THE BOX past Jason, maintaining the curation of videos up until MTV dissolved the brand identity in the USA. The brand identity remained alive in the UK for some years afterwards.